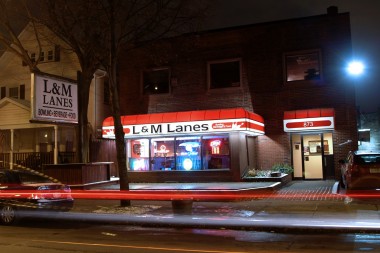 “I’ve always loved this place. It’s a real neighborhood hangout, and you get to know everyone,” says Gary, a lifelong resident of Rochester and General Manager of L&M.  “I love seeing old faces come back in, some bringing their kids now, and seeing new people fall in love with L&M too.”

The building has a unique history.  It was built in the early 1900s as a nickelodeon, showing movies for the neighborhood.  The Taddeo family bought it in the 1950s.  They took out the balcony, added a second floor and the wood lanes.  Kids were originally pinsetters – no machines needed at Taddeo’s Eastside Lanes!  Decades and upgrades passed.

Dick Ladd purchased the business in 1978, keeping the “Eastside Lanes” but dropping the “Taddeo’s.”  Eventually, he renamed it Ladd’s.  Dick hired Gary in 1988 to help in the kitchen and fix the machines.  Ladd’s wings were legendary in the neighborhood.  The entire Stubbings family was involved in the youth leagues here. Gary worked at Ladd’s until Dick moved to Reno in 2000.  Ladd’s was closed for a few years, until 2003 when Mike and Linda Toole bought the place.  They continued the tradition of great wings, and renamed it L&M Lanes.

When Mike and Linda decided to retire in 2011, they remembered conversations with Gary about Ladd’s and his wish to have bought it.  We’re glad they called!  We still use Mike’s wing sauce, and hope to add Dick’s wing sauce to the line up as well.

Follow L & M Lanes on Twitter and Facebook for updates on specials and upcoming events. We'll even keep you up to date with our beer selections.